Through stereopsis a powerful battle unfolds with the first Gundam title to be released on the 'Nintendo 3DS' platform! 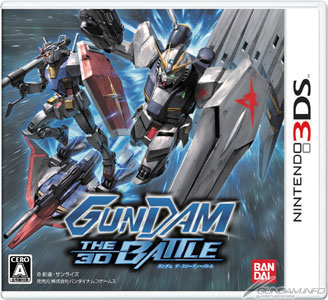 The development group delivers a new 3D action game in the 'Gundam Battle' series called 'Gundam The 3D Battle.' Players now have the ability to enjoy the game through the 'Nintendo 3DS' three-dimensional viewing system, and through stereopsis have a powerful new Gundam Battle experience unfold before them. Players create their own original pilot, and customize their favorite mobile suit, and then battle through various missions set against the backdrop of Universal Century.

Furthermore, the data of the pilots and mobile suits that you have trained can be exchanged with others via 'StreetPass,' which means a broader play experience awaits you.


For more information about the contents of the game, please check out our previous articles!