Their dream is to make it to the Gunpla Battle World Championship... and win! 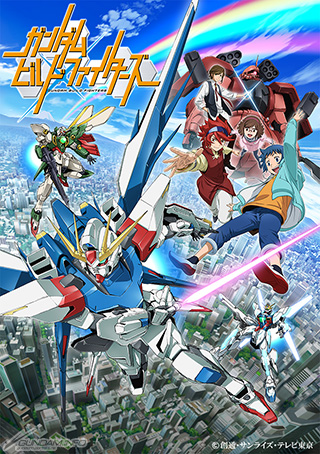 Episodes will air in order once a week at 7:00 PM on Sundays, beginning with the first episode on the the 4th.
If you haven't seen the young Gunpla builder Sei and the mysterious boy Reiji in action yet, don't iss out!

Years after the huge "Gunpla"-plastic models based on the anime series Mobile Suit Gundam-boom of the 1980s. A second Gunpla boom is taking the world by storm, fueled by the revolutionary new ability to pilot your own Gunpla creations in "Gunpla Battles".
These incredibly-popular Battles culminate in a yearly global tournament.

Our hero Sei Iori, is a young Gunpla builder who dreams of someday making it to the world championships.
An only child whose family owns a model shop, his talent is well-honed, but his weak piloting abilities have led to a series of first-round losses. Then, one day, he meets a boy named Reiji whose piloting skills are incredible. Together as a team, they take on the world!

Sei, the Gunpla Builder.
Reiji, the Gunpla Fighter.
Sei builds, Reiji fights.
Together, they're the Build Fighters!
Their dream is to make it to the Gunpla Battle World Championship... and win!