The Knight Gundam series is reborn in a deluxe boxset!

Preorders for the rebirth of the Knight Gundam series, "Shinyaku SD Gundam Gaiden Sadd'rac Knight Saga: Shinwa Fukkatsu-hen", have opened on the Premium Bandai Carddas Shop.
Orders will ship in January 2013 at a price of ¥8,190. 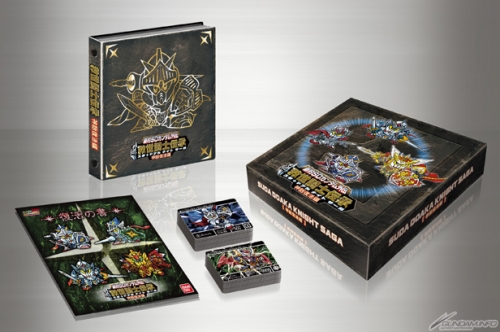 Knight Gundam is the most popular SD Gundam Carddas series. In this, the first set of its rebirth, characters from the early Siegzeon and Entaku no Kishi arcs are redrawn with new poses.
The best art from the Ultimate Battle series is also reproduced on cards in the original Knight Gundam format, and there are even brand-new characters on special secret cards!

Also included are the first real card versions of originals from Mobage's Knight Gundam Carddas Senki social game, and a booklet unraveling the series's history.
All cards get the special prism treatment, and the set also comes with an embossed binder—and all this in a gorgeous deluxe box illustrated by the maestro Yokoi. 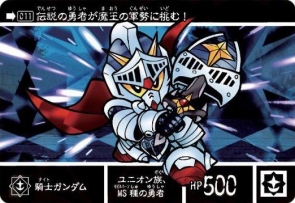 What hints to the future of the Knight Gundam series does the booklet hold?
Don't miss the curtain rising on a new series!