"What is 'Gundam', anyway?" This simple (?) question is answered in our thirty-first casual weekly column just for new fans!

Have you been hit by a poison dart? No, just a similarly-rare super-simple intro column for new Gundam fans! We're back with Part 31 of what makes Gundam Gundam.

Have there really been 30 of these columns? (← And now another one!) I wonder if anyone's actually read the whole way through...
Anyway, you can see our previous coverage of what makes Gundam Gundam here, and this week we're back with another Gundam standard!

One of the best things about Gundam is its marvelous machines!  Yes, those mobile suits (MS) and mobile armors (MA).
Our 31st column, "What's a Mobile Armor (MA) (Part 1)", looks at the most significant mobile armors of Mobile Suit Gundam!


Way back in part 4, talking about mobile suits, we briefly touched on what's probably one of the three most common questions new Gundam fans have: "What's the difference between an MS and an MA?" We briefly touched on the answer earlier, but........ To be honest, there's no hard and fast rule! There's no universal (!?) practical standard like "above this height is an MA" or "below this weight is an MS", though those figures certainly help.

This is about the point where you pout and go "what's the point of having two terms if there's no real difference", but really, each individual Gundam series has its own separating line.

It's probably best to think of the line between MSes and MAs as like that between classes of cars or trucks. In Japan, a certain kind of small car is taxed and inspected differently; in the US some kinds of truck are treated like normal cars and some aren't, right? The line between MS and MA is kind of like that.
(Wouldn't it be hilarious if you actually had to take your mobile suit in to get the exhaust checked every year or so, and there was a license plate complete with registration sticker attached to one heel?)
Anyway, even though there's no solid line, a simple rule is: is it big? Is it non-humanoid? If so, then it's probably an MA! Easy, right? (← No, sadly, not that easy.) 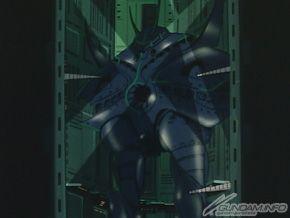 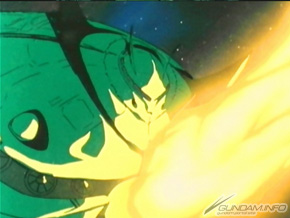 The first one we'll look at is the Principality of Zeon's "Big-Zam". Designated MA-08, it stands 59.6m high at the head and weighs in at 1,021.2t. Its pilot is Vice Admiral Dozle Zabi, commander of Zeon's Space Attack Force.!

Yep! This is it, the MA he stood on while shouting his famous last words!
The Big-Zam (and isn't that dash such a charming affectation?) is primarily remarkable for being just as beefy as Dozle—and for its huge mega particle cannon, i-Field (a barrier which blocks mega particle beams,) and the ability to crush entire Federation task forces singlehandedly. Federation Lt. Sleggar Law attempted one last suicidal charge in the G-Fighter, which wasn't even enough to take the Big-Zam down, but afterwards an enraged Amuro...

On its own, it may look like some kind of enemy crab or something, but line it up next to the Gundam or other MS and you can see just how giant it is. But it's exactly that massive bulk that prevents it from being mass-produced, leaving the Big-Zam the only one of its kind... However, short though its appearance was, it set the baseline for big, tough mobile armors that continues to this day. 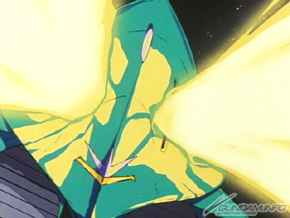 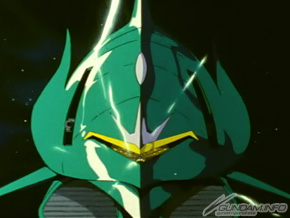 It was a prototype developed at the Flanagan Institute, a Newtype research laboratory established by Char's commander Kycillia Zabi.
The Elmeth, designed for use only by Newtypes, featured a "Psyco system" (allowing control via special brainwaves) and a loadout of wireless all-range weapons called "Bits", along with a specialized, streamlined cockpit designed to optimize use of these in combat. The Bits, beam cannon platforms which could be controlled remotely by brainwave, allowed attacks on faraway enemies from any angle, a capability the Flanagan Institute's OG Newtype (!?) Ensign Lalah Sune put to good use.

At the Battle of Solomon, these bits were used to decimate the Federation's garrison, earning her the nickname "the Ghost of Solomon". It must have been terrifying to be attacked from all angles by unknown weaponry.

At first look, the Elmeth looks like some kind of plant bulb or seed (← Especially because it's green,) leading to Federation Ensign Mirai Yashima remarking that it looked like a tulip or some kind of cap, and it seems that the design is popular with the ladies.

The Elmeth's quality engineering led to its use as a base for future Newtype-use mobile weapons; it's said that even Axis's (Neo Zeon's) Qubeley is a successor. 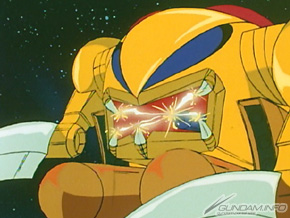 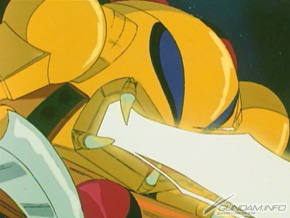 Next, the Principality of Zeon's "Zakrello". Designated MA-04X, its height is 25m and its weight is 185t.

It looks for all the world, with its twin heat hooks, like a rushing slasher that would charge in from an enemy's blind spot and tear in to pieces or hit it with a scattering mega particle cannon blast, but its low mobility meant that it was never mass-produced. (...........)

These monstrous, terrifying looks still make it one of the most memorable mobile armors, though. Its complex main cameras give it the look of some sort of massive insect. It's even got fang-looking things growing from its mouth... Doesn't it just look like it'll chew your hand off if it gets a hold of it!?

I suppose (?) that just like people, mobile armors aren't always as scary as they look, but I still wouldn't want to run into this one in a dark alley.
It looks more like some kind of alien invader than the military hardware that populates the rest of Gundam. The Zakrello, with that nasty face it has, is definitely a mobile armor you won't forget. (← On the other hand, it seems like kids would absolutely love it. ... Maybe.)

…………So far we've focused on mobile armors from Mobile Suit Gundam, but later on, the line between MA and MS begins to blur. Let's take a look at the one which seems to give people the most trouble. 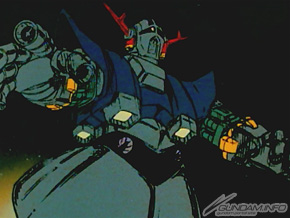 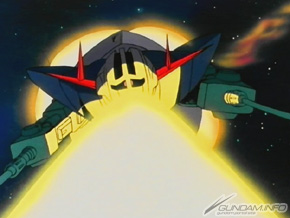 Last but not least is the Principality of Zeon's first Newtype-use MS intended for combat: the "Zeong". It was designated MSN-02. Standing at 23m (and planned for a total height of 39m, with legs attached,) it weighed in at 151.2t. Zeon's final mobile suits, it fought to great effect at the Battle of A Baoa Qu which ended the One Year War.

A couple weeks ago, when we heard that famous line "Legs are just for show. The brass doesn't understand things like that.", this is the suit he was talking about.
This mechanic's blunt response to Char Aznable (when asked about the lack of legs) was short, but it's one of the most memorable scenes in Gundam.

Compared to the Big Zam that was like a crab shell perched on two massive chicken legs, the Zeong's massive torso rests on a skirt, but since construction was only 80% complete it had no legs. The unique advantage of the Zeong was that, by use of a Psycommu (a control system operated by special brainwaves,) it could perform all-range attacks (!) from a pair of 5-mega-particle-cannon arrays mounted on detachable hands. With unexpected maneuvers like these (and while fighting in space), legs really are just for show, aren't they?

With each finger actually a mega particle cannon, the Zeong is a fleet-obliterating machine with all the firepower of a mobile armor; combined with its huge size and restricted theaters of combat, it makes sense that it would be mistaken for a a mobile armor (and that only a prototype would ever be built.)